If you live in the States, pretty much wherever you are, there should be some rockin’ corn on the cob available (if not, bummer, sorry dude). And while there is nothing wrong with the traditional version of corn, butter, salt and pepper, it is always good to experiment. And sometimes those experiments pay off. This is one of those times. (There are also those “other” times, but we choose not to blog about those….)

Beyond the normal corn on the cob recipes, we often like what is called “Mexican Corn” where you add some mayo, spices, and/or cheese to your corn on the cob. You might even grill the corn for more smoky flavor. All good, but a bit  “complicated”. On the other hand, we figured that simplicity may be the answer. Why not take the basic ingredients and substitute a few favorites? And when we think of favorites, we think bacon fat…bacon is the 8th wonder of the world, after all. Out goes the butter, in goes the bacon fat. 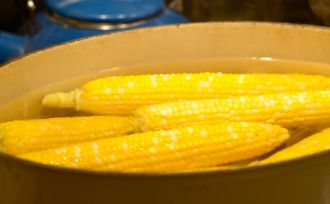 Yes, it may seem wrong to use bacon fat directly on fresh corn on the cob, but we use it all the time in cut corn preparations, so why not? And since we were adding some nice smoky flavor, we decided to double-down and substitute smoked paprika for black pepper. We kept the salt. Salt, there is no substitute.

How did it turn out? Well, “you had us a bacon fat”. We loved it, the boys loved it and there was no extra effort. Boil water, cook corn, apply bacon fat, add seasoning, consume, repeat. And the taste was as expected, sweet and salty with an extra layer of deep smoky flavor. And that smoky flavor comes without using a grill for cooking the corn. Nice.

So, will we always do “bacon fat corn on the cob”? No, we still like butter as well. But this is already a standard here at the farm, we suggest you give it a try. Besides, it is a good excuse to cook up some bacon…

Notes: No notes. Go make some bacon and save that fat! And if you want to chop that bacon real fine and roll the corn in it, that won’t suck either.

7 thoughts on “The Best Corn Ever: Bacon Fat Corn-On-The-Cob”