Nothing makes us happier than growing, cooking, eating and sharing our own food. But there is a slight tyranny to the seasons. If you have cherries, you are cooking with cherries, period. And our Bing cherries are at their peak, so we picked them all. One small tree gave us four large bowls of cherries…all at once. Happily, cherries lend themselves to all sorts of dishes and cocktails (and we do seem to like eating and drinking). So this week you may see cherries in all sorts of dishes. But for now, let’s start with a classic cherry dessert, clafoutis.

Clafoutis is a French dessert that combines cherries baked in a light batter, often with some added almond flavor. Think of the batter as “flan-meets-pancake” and you can get an idea of the light, yet rich, texture that rightfully lets the cherries star in the dish. Originally clafoutis featured sour or black cherries with the pits still in. Supposedly the pits add extra almond-like flavor, but as we have Bing cherries and like our teeth, we put pitted Bing cherries and almond extract in our clafoutis. You can also use this basic recipe with other stone fruits or berries, but if you want to be technical it would then be a flaugnarde, but feel free to call it a clafoutis- we won’t tell anyone. 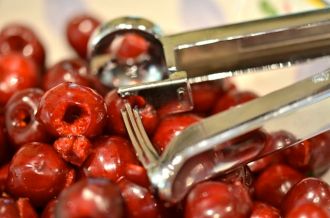 A cherry-pitter is a useful tool if you like cherries as much as we do.

As for the recipe, clafoutis is a classic dish and there are many recipes out there. We chose to adapt an Alice Waters recipe that adds a few extra steps, but also adds extra flavor. In this case we season and pre-bake the cherries before we add them to the clafoutis. The extra cooking improves the flavor and texture of the cherries, but also leaves behind the base of a syrup you can reduce and drizzle on top of the clafoutis at service. Good stuff. We also prefer to cook clafoutis (and many desserts) in individual ramekins, we think it looks good and makes leftovers easier to handle, but a large baking dish works for this recipe as well. 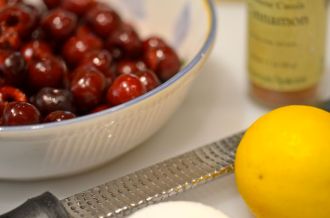 Season the cherries for pre-baking.

Extra cooking for more flavor and better texture- plus you get cherry juice for a sauce.

Place a layer of cherries in the ramekins or baking dish.

Assembling the clafoutis is a pretty easy affair. Pre-cook the cherries, save the syrup, butter your baking dish(es), place the fruit in the dishes, make and add the batter and bake. The batter is the only part of the recipe that requires some extra effort, you need to whip egg whites and then fold them into the batter for the right texture. The clafoutis bakes for about 20 minutes at 375 degrees. While the clafoutis bakes, reduce your cherry syrup for a tasty and pretty sauce. When the clafoutis is done, add the sauce, dust with powdered sugar and serve. 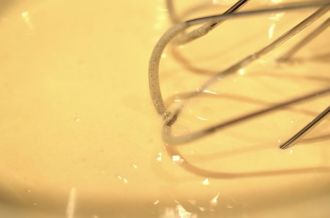 Pour batter over the cherries.

Bake until browned and puffed.

Dust with powdered sugar and drizzle with sauce. Serve.

And then prepare for smiling faces. The clafoutis is a beautiful dessert that matches its looks with great flavor and texture. The cherries shine with their sweet / tart flavor that is amplified by the almond and the sweet cake. The “cake” is, as we noted earlier, is rich but remarkably light. And we discovered one extra bonus, the clafoutis is also tasty the next day, served chilled. So if you like it, feel free to serve any clafoutis left over for breakfast.

What You Get: A classic cherry dessert. Tasty and very pretty.

What You Need: No special equipment required, but after you remove the pits from a few dozen cherries a cherry-pitter may feel like a good idea. We have one and love it, even if it gets used just a few months of the year.

How Long? About 45 minutes, with 10-15 minutes of active time. An anytime dish….any time you have cherries.