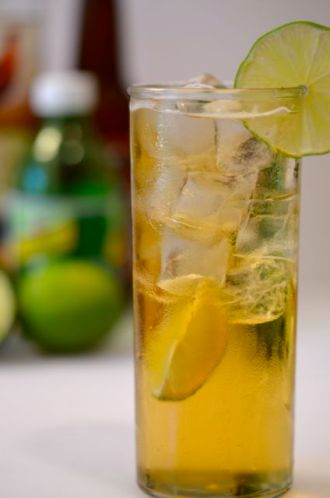 Anyway, it turns out that our local farmers market is near a very popular church. The church is so big they have three services every Sunday morning, which happens to be our farmers market time. Most of the year this isn’t a big deal, but as we get into summer the crowds at the farmers market grow and parking becomes scarce. Tempers can flare a bit (silly, I know, but such is local life) with the crowds and one friend recently remarked “better get there early or you will be chucking elbows with those damned Presbyterians!” Classic.

While we don’t have a dog in that fight, the comment did remind us of the Presbyterian cocktail. We were looking for a summer drink that used whiskey, rather than lighter spirits and the Presbyterian does the trick. The Presbyterian not only uses whiskey, it uses blended scotch, something we don’t often equate with summer. The Presbyterian combines 1 part scotch with 1-2 parts of ginger ale (or ginger beer) served over ice. And it is surprisingly good, particularly if you like scotch or blended whiskey. The sip is refreshing, with a touch of the smoke and peat from the scotch and some sweetness and spice from the ginger ale. The scotch keeps the sweetness in check and provides a clean finish. A good cocktail but perhaps a bit off-beat for some.

Happily, we are just a little lime juice away from the “evolution” of the Presbyterian, the Mamie Taylor. Most cocktail historians agree the Presbyterian was created in the late 1890’s and that by 1900 someone added some lime and called it the Mamie Taylor, and it became a very popular drink. Mamie, it seems, was a famous singer of the time, just not famous enough to leave any other records or herself (heck, maybe she just knew the bartender who created the drink). At least she lives on as a cocktail, and the lime juice certainly makes the Mamie Taylor more approachable and balanced. The lime juice adds the acidity and sour notes that play well with the scotch and ginger ale. This shouldn’t be a surprise, as both the Dark and Stormy and the Moscow Mule are believed to be variants of the Mamie Taylor and both remain popular drinks.

But if you like scotch or whiskey and want a longer, summer drink the Mamie Taylor is certainly worth a try. Even Carolyn said, if you want to serve a “brown drink” make it that one- and that is high praise. We tried The Famous Grouse and Johnny Red as the scotch and both worked well. We also tried using Schweppes ginger ale and Cock and Bull ginger beer and found slight differences in spice, but if you have a ginger ale/beer you prefer, it should work. The recipe also suggests you play around with the volume of ginger ale to suit your tastes, we found 3 oz. to be about right. The big variable is the lime juice, just a little gives balance, add a lot and the scotch becomes a background player.

Some recipes for the Presbyterian and the Mamie Taylor erroneously suggest using rye or blended Canadian whiskey, but we would recommend against it. We tried these recipes with High West Double Barrel rye and it was a bust. Unless you like very, very sweet drinks, the taste becomes downright cloying by the third sip. So in some ways ,the relative “austerity” of the scotch is a better choice, and these cocktails live up to their Presbyterian heritage. Ok, that’s a stretch…but they do taste good.

4 thoughts on “Cocktails for Memorial Day: The Presbyterian / The Mamie Taylor”